for those of us living in Benin city and environs, its no longer news that the gubernatorial election is fast approaching or will i say close? that said, i took my time all through yesterday admiring and reading about the two top contenders GODWIN OBASEKI and PASTOR OSAGIE IZE-IYAMU. then i fell in love (looolz) with the later, i know most of you will call this cheap publicity, But NO, i
don't know him, he doesn't know me too and YES its my blog and i can write whatsoever pleases me, i love his FUTURE IS NOW motto(or whatsoever it's been called), with his word/speech, he seems like someone who has focus and can move our state forward. and oh Godwin also looks nice, but i don't have anything sweet to write about him.
I am really thinking twice, told myself i was not going on the said date (September 10th) to vote due to the rigging attitude of our politics and the fact that whosoever the incumbent governor brings wins. but if my one vote will count, i wish to vote for this man. Pastor Osagie Ize-Iyamu(Not the party) 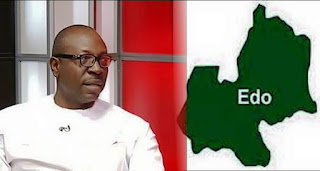 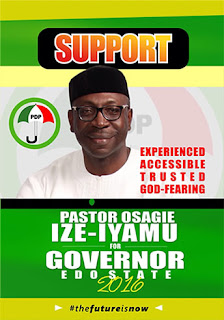 Comments are the Opinion of the Comment writers & does not reflect the views of Girlbestfriend
Posted by Unknown at 06:22:00
Email ThisBlogThis!Share to TwitterShare to FacebookShare to Pinterest
Labels: Life in B-side