Okagbare Crashed out of Rio 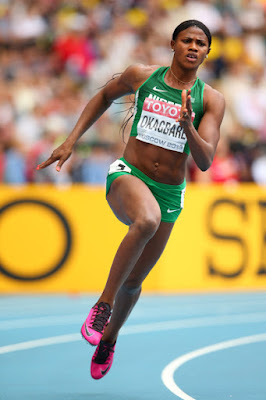 Blessing Okagbare, top Nigerian Athlete, has crashed out of Rio 2016 Olympics 100m. She came 3rd in her semi-final heat with a time of 11.09seconds and as a result couldn't make it to the finals as only athletes who ran under 11seconds could qualify to the final.


The women's final race was won by Jamaica’s Elaine Thompson, 24. Others who competed in the final included Shelly-Ann Fraser-Pryce, Tori Bowie, Ta Lou, Dafne Schippers, Michelle-Lee Ahye and English Gardner,
Blessing Okagbare won Bronze in the Long Jump at the 2008 Beijing Olympics at the age of 16 and won again in 2014 Common Wealth Games. (still proud of her though)
Posted by Unknown at 01:46:00
Email ThisBlogThis!Share to TwitterShare to FacebookShare to Pinterest
Labels: Rio 2016