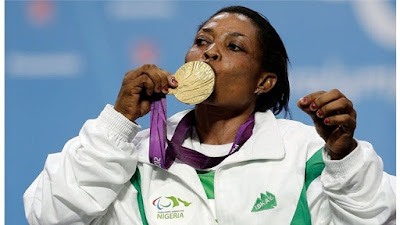 Esther Oyema gave Nigeria its third medal of the 2016 Paralympic Games in Rio on Saturday by winning a silver medal in the power-lifting competition.
Oyema won the medal in the women’s -55 kg event of the competition after finishing second in the event.

She won with a lift of 127 kg in the nine-athlete event.

Her first attempt at 127 kg was a failed one, but she got it right in her second attempt, while her third attempt which was at 130 kg was also unsuccessful.


Amalia Perez of Mexico was however successful as her 130 kg lift earned her the gold medal, as well as new Paralympic and world records in the event.

Xiao Cuijuan of China finished third with a lift of 115 kg to win the bronze medal.

NAN reports that Nigeria had on Friday won one gold and one silver medals in power-lifting.

The Paralympics will end on Sept. 18.

cullage-Premium times
Posted by Unknown at 13:06:00
Email ThisBlogThis!Share to TwitterShare to FacebookShare to Pinterest
Labels: Rio 2016