Manchester United Star, Anthony Martial, Named most valuable Under-21 player on the planet

Manchester United Forward Anthony Martial is the most valuable Under-21 Player on the planet, according to a report by soccerex. The study, which uses Prime Time Sport's Football Value Index, has valued the 20 years at 39.7million euro, after an impressive debut season at old trafford.
Many labelled Martial a 'panic buy' when United completed a last minute 36million euro deal which could rise to 56million euro, last summer but the young striker proved the initial sceptics wrong.
other young players on the list include 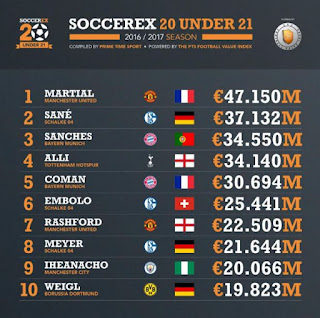 courtesy: METRO
Posted by Unknown at 18:26:00
Email ThisBlogThis!Share to TwitterShare to FacebookShare to Pinterest