Chelsea found to be the most hated team in the premier league.


Chelsea have come top of the pile as the most hated premier league team, just ahead of Manchester united and Liverpool. Arsenal for once, are out of the top four in this particular contest, coming in fifth place, while Bournemouth are officially the country's least hated side. 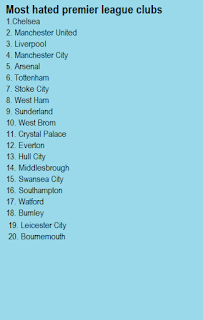 An interesting rivalry has cropped up between last season's two main title contenders Spurs and Leicester city. Despite little history between these sides until last year, Leicester fans now list Tottenham as their most hated club, whilst in return also being more hated by them (Totteham)

Posted by Unknown at 05:22:00
Email ThisBlogThis!Share to TwitterShare to FacebookShare to Pinterest