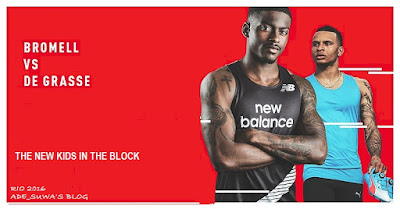 The future of world sprinting will be on display at the 2016 Olympics meeting in Rio De Janeiro, when Canada's Andre De Grasse and USA Trayvon Bromell go to there blocks in the 100m dash.

Bromell and Canada's Andre De Grasse are showing promise of becoming the next faces of track and field's event. The two shared the 100m bronze medal at the 2015 world championships after they both crossed the finish line in 9.92 seconds. At the time, the two sprinters were just 20 years old and still enrolled in college

TRAYVON BROMELL
He is the first junior to surpass the 10-second barrier. March 18, 2016, Bromell won in 6.47seconds the 60m at the 2016 IAAF world. TMZ sport once interviewed him, and he claimed every reign comes to an end "cause" he believes he can dethrone the fastest man on earth (atleast thats what TMZsport claimed he said) Bromell says despite Usain's unbelievable record NO ONE is immune to an ass whupping from time to time. But that doesn't mean he hasn't done well for himself. he ran a blistering 9.92 to Usain's 9.79 at championships.

ANDRE DE GRASSE
Toronto Native, Andre De Grasse set the sprint world ablaze at the NCAA Championships in Eugene, Ore. where he ran wind-aided times of 9.75 seconds in the 100 meters and 19.58 seconds in the 200. Those performances ranked among the top 10 all-time under any conditions and immediately thrust him into the conversation of whether he could be the future heir to Usain Bolt's global dominance. He said he hopes to beat Bolt before he retires. He went on to claim two gold medals at the Pan Am Games at home in Canada before competing at the IAAF World Championships in Beijing, where he tied for the bronze medal in the 100 meters. He is been referred to as the future of Canada track.

Bromell and De Grasse are both Product of the highly competitive US collegiate system.


The two spinsters became friends when they both made their international debuts at the 2013 Pan American Junior Championship in Colombia. They developed Mutual respect as De Grasse claimed 100m silver medal, while Bromell took home bronze.

In their short careers, both have shown an appetite for quality competition.

"The future is bright for our sport," Gatlin said in an interview. "Those two guys are gong to be racing against each other for the rest of their careers.

It is expected that they will be in the hunt for gold in the 100m at the Rio 2016 Olympic Games and add another chilling chapter to there rivalry.


N.B- Bolt, who will turn 30 years old on August 21, and Gatlin, 34, have demonstrated their willingness to mentor the two up-and-coming sprinters.

courtsey: IAAF.org and NBCRio
Posted by Unknown at 11:51:00
Email ThisBlogThis!Share to TwitterShare to FacebookShare to Pinterest
Labels: Rio 2016