Day of shocks at the Olympics

You cant't begin to imagine athletes crashing out of games they are been decorated on. first on my list is Djokovic who's ass was whooped by Juan Martin Del potro. I guess Del Potro is Djokovic nemesis, because this same athlete stopped him from calming bronze in London 2012.
"No doubt this is one of the toughest losses in my life and in my career" he said, "it's not easy to handle, especially now, just after the wounds are still fresh.
"But, you know, you have to deal with it, it's not the first or last time that i have lost a tennis match. But the Olympic Games, Yeah, it's completely different" 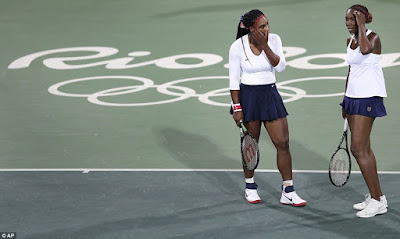 Three-time doubles gold medalists Venus and Serena Williams have lost their first-ever Olympics doubles match.
The tennis champions have won gold in the doubles matches at London 2012, Beijing's 2008 Games and at Sydney's Olympics in 2000.
They were favorites to take home their fourth gold on Sunday, when they lost in straight sets to the Czech Republic's Lucie Safarova and Barbora Strycova in 93 minutes.
It comes as yet another blow for Venus who crashed out of the women's singles Olympic tennis tournament in Rio on Saturday. 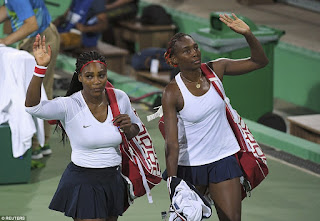 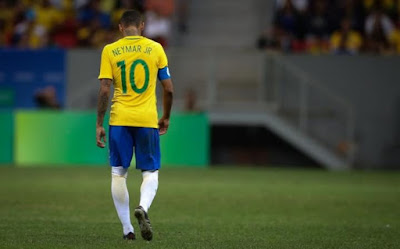 Even the home crowd turned on their own team(looolz!) Brazil, who could only draw with South Africa in their opening match, had more of the ball and pushed forward in droves as the match wore on but they could not find a way past the Iraqi rearguard.

Brazilian fans turned on the men's soccer team after a 0-0 draw with Iraq on Sunday that left them in serious danger of exiting at the first stage of the Olympics.

Posted by Unknown at 03:27:00
Email ThisBlogThis!Share to TwitterShare to FacebookShare to Pinterest
Labels: Rio 2016