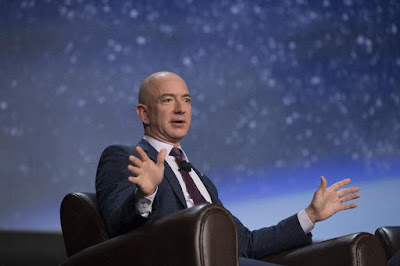 Amazon CEO Jeff Bezos is once again the third richest person in the world, ahead of Berkshire Hathaway, Warren Buffett.


Ever since July 22, 2016, when Bezos briefly passed up Buffett during trading hours for the first time, the two billionaires have remained neck and neck. Bezos again passed Buffett nearly a week later on July 28, as Amazon stock and Bezos’ net worth hit record highs. Both billionaires own such large amounts of stock in their respective companies that small stock market fluctuations can have billionaire dollar consequences for their net worth's–and their ranking on FORBE'S real time Billionaires list.
Bezos would be nowhere near as rich as Buffett if it weren’t for Buffett’s philanthropy. He has donated $28.9 billion (in Berkshire Hathaway stock) to charitable foundations over the course of his lifetime. The small charitable donations Bezos has made (at least what has been publicly disclosed) are a drop in the bucket in comparison. Buffett and Microsoft founder Bill Gates, who is the world’s richest person, created the Giving Pledge in 2010, asking billionaires to donate half of their wealth to philanthropic causes. Bezos has not signed the pledge.

While Buffett has long been one of the richest people in America, Bezos’ rise to the top is more recent. Buffett appeared on the very first edition of the FORBES 400 richest Americans list in 1982 with a net worth of $250 million and became a billionaire three years later. Buffett has been listed as the second richest person in the United States on every FORBES 400 since 2001.

Bezos, meanwhile, appeared on the FORBES 400 for the first time in 1998 with a net worth of $1.6 billion, making him the 102nd richest person in the country that year. He didn’t crack the top 10 of the FORBES 400 until last year, when he was the 4th richest person in America after ranking 15th in 2014. But now, thanks to the meteoric rise in Amazon’s share price, Bezos is second only to Bill Gates–at least for today.-FORBES Cullage
Posted by Unknown at 16:21:00
Email ThisBlogThis!Share to TwitterShare to FacebookShare to Pinterest
Labels: News