Photo..All the top coaches snapped together at UEFA conference 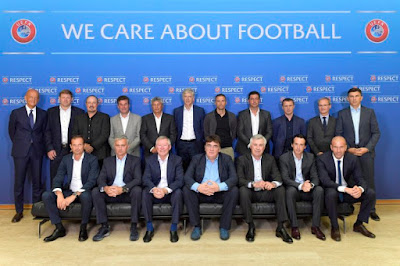 Sir Alex was chairing the forum held on Wednesday and Thursday in Switzerland, which saw some of the world’s best coaches gather together.

The likes of Zinedine Zidane, Carlo Ancelotti, Max Allegri and Arsene Wenger all gathered together to discuss some of the issues of the game in its current form.


The annual conference in Nyon saw Ferguson speak about a number of issues, including the amount of games young players play in the modern game.
He also argued the case that extra-time should be abolished.
The forum has been running since 1999 and takes place in Uefa’s headquarters.

Metro sport
Posted by Unknown at 03:53:00
Email ThisBlogThis!Share to TwitterShare to FacebookShare to Pinterest
Labels: Sport