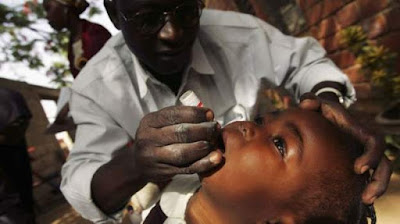 In Nigeria, a third case in a recent outbreak of polio has emerged, the World Health Organization (WHO) has said.
The virus has affected a child who has been paralyzed.
The WHO has linked this case to two initial cases which were discovered in August. These were the first on the continent for two years.
The Nigerian authorities are carrying out a mass polio vaccination campaign to try and deal with the outbreak.
Polio is a viral disease that usually affects children and can only be prevented through immunization.
It is spread by poor sanitation and contaminated water- BBC Africa

Posted by Unknown at 11:51:00
Email ThisBlogThis!Share to TwitterShare to FacebookShare to Pinterest
Labels: News