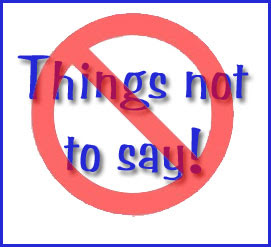 So recently, I went visiting a friend who was dumped via text message. It’s cold, it’s insulting and is a downright act of cowardliness, there is simply no excuse for.  Since then I have been observing the things i say to her since she had her heart broken. Sure, i want to be there for her but how much of what i am saying is constructive or even getting through to her post break-up brain? So I decided to compile all of my emotional research and create following list of what I believe you should not  say to a friend who’s JUST been dumped (via or not via text message).

1. “He’s an ass/dick/cock/jerk/insert one syllable insult.”

Although this is probably accurate if he’s chosen to dump a banging babe such as your friend, THEY DON’T FEEL THIS WAY ABOUT HIM INSTANTLY. They will, in time, hit the angry phase but all they are thinking about in that moment is that the ass/dick/cock/jerk isn’t theirs any more. And that hurts them more than it angers them.

You know what, probably also very true. However thanks to years of Katherine Heigl and Julia Roberts filled romantic comedies this line has been over used and feels like nothing but a cliché read straight from a script. If you want to remind them how wonderful they are, use specifics! “You are so incredibly intelligent that when you used words with more than 3 syllables you were confusing him!” “You are so stunning, I thought you were only dating him because you were bored, like it was an act of charity or something” (that last one may or may not be from personal experience)


3. You will find someone else

NO NO NO NO. Ok yes, it’s true they will. But I can assure you moments after a break up they don’t want anyone else. They are just adjusting mentally to the status of “single” and the acquisition of an “ex”. They are hurt and confused and the idea of creating an ok cupid/tinder account does nothing but fill them with the anxiety of dating again. (Not that you need one girl! You do you!)

4. Were you even that close?

Just stop it. You don’t know the intricate details of their relationship, so don’t question it. All this will do is prompt them to go through their memory bank and prove to you, their comforting friend, how close they were. They don’t need to be doing that right now. They have other things on their mind.

5. Think about all the free time you'll have now

Depending on the relationship there’s a good chance first week of that time will probably be spent crying in the shower and visualizing throwing heavy blunt objects at happy couples. And don’t you dare suggest a hobby they can take up. They are not a child that needs to be distracted. They are still your friend that you know and love and only you will be held responsible if you’re asked to come along to their African dance recital. You’ve been warned.

6. “They weren’t even that attractive.”

NOPE. They were attractive to your friend. Not you. That’s why they were dating them and you weren’t. Everyone has different tastes.


7. You should totally insert vengeful act of revenge

Yea ok, you’re their friend and you don’t want to see your friend hurting so a natural response is to want to hurt the ex that’s hurting your friend (keeping up?) But don’t tell THEM to do it. That makes your friend look bad and then you don’t want to be that friend that suggested they leave the bag of poop on fire on the doorstep (no matter how good it may feel to do at the time)


8. “It’s his loss!”
Also completely accurate. But it’s hers too. You weren’t there for all the days they spent together and the nights they fell asleep together (If you did you’re a creepy ass friend who needs to give a brother some space!) So you don’t know what she’s losing. But loss is what she’s thinking about most.  Pointing out that he’s losing this too is obvious. The problem is it was his choice to, not hers.

The scariest part of dating someone is at some point you’re either going to break up or get married. It’s a risk. My only uneducated advice is to listen, don’t tell them how to feel and they will get there on their own. Common sense will kick in and they will realize the person that they put on the metaphorical pedestal never deserved a seat.

And dumpees (sorry, awful term) When your friends give you this advice they really they have the best intentions at heart, but only YOU choose how you act.  Don’t act like someone you’re not just because you’re hurting. You’re still a fierce boss so remember every feeling is temporary — put on some mascara and go be the best looking mess anyone’s ever seen

Culled from the thought catalog
Posted by Unknown at 16:22:00
Email ThisBlogThis!Share to TwitterShare to FacebookShare to Pinterest
Labels: Relationship