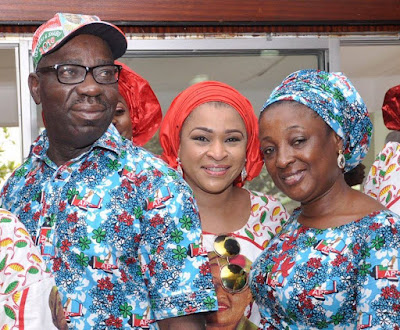 Women from various organizations in Edo State over the weekend in  demanded that Mrs Betty Obaseki, the wife of APC candidate in the state apologize to all Edo women over a statement , she allegedly made accusing the past PDP administration for contributing to the problem of prostitution among Edo women in the state. They demanded she tenders an unreserved apology in all national dailies . Deaconess Regina Oviasu who addressed the women said that it is a something to worry about that Obaseki intends to lead Edo women she tagged as prostitutes. She said : “ I want to stand and say that Mrs . Obaseki should apologise to all Edo women as mothers , wives , sisters, and daughters for the statement she made. She does not know Edo women . An Edo woman has integrity . She commands respect. She is hardworking . I think it ’s a slip of the tongue on her part , and she must
apologise ” . Former Executive Director of the Edo State Poverty Alleviation Agency in the APC government , Chief Evelyn Igbafe also complained about Edo women being labeled as prostitues by Mrs Obaseki. She said : “ We are not happy that a woman who has a husband who wants to be the governor of Edo state will tag Edo women as prostitutes. We reject her aspiration. She can never become the first lady of Edo State. We will not close our eyes and allow such a woman who is not even from Edo State to tarnish our hard earned image ” . Source : Vanguard
Posted by Unknown at 04:58:00
Email ThisBlogThis!Share to TwitterShare to FacebookShare to Pinterest
Labels: News