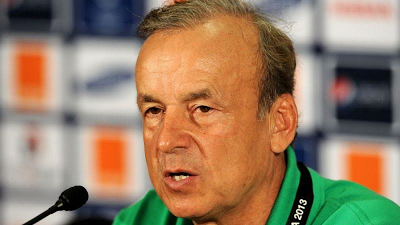 Enyeama, 34, who unceremoniously called off his Super Eagles career on October 8, 2015 after a feud with former coach, Sunday Oliseh that eventually led to his captaincy being taken away from him and given to Ahmed Musa.
But Rohr, while speaking to journalists during his maiden pre-match press conference at Le Meridien hotel, Uyo said he knows Enyeama's quality having seen him shine for Lille in the last two seasons and wants him back in the squad.

“I asked about Enyeama when I signed because I know his qualities,” Rohr told media ahead of Tanzania’s game. I also spoke with the goalkeepers’ coach Alloy Agu and he spoke highly of him. I’ve called and spoken with Enyeama since my resumption but nothing is settled yet. I will see him after the Tanzania game because I saw him play in France and he’s the kind of player we need to help us move forward.”

Posted by Unknown at 20:13:00
Email ThisBlogThis!Share to TwitterShare to FacebookShare to Pinterest
Labels: Sport